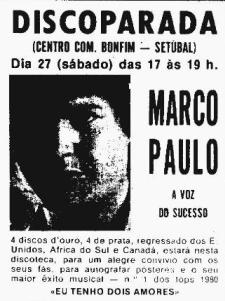 LISBON -Despite the pervading aura of economic crisis and rampant inflation, record and cassette sales increased in Portugal last year over the 1979 figures; disk sales were up by around 15% and cassette figures rose by 20%.

A breakdown of the statistics as- sembled by GPPFV, the Portuguese branch of the International Federation of Producers of Phonograms and Videograms (IFPI), show single sales at 3.5 million for the year, albums at 4 million and cassette sales at one million. Mail-order sales of Reader's Digest also hit the million mark.

That legitimate cassette sales are on the increase is largely due to the persistent fight against tape piracy waged by GPPFV as the Portuguese industry watchdog, and by Sociedade Portuguesa de Autores (SPA), the copyright society which handles both performing and mechanical rights.
The national record credits 1980 rock concerts in Lisbon and Oporto by such U.K. acts as Police, Peter Gabriel, Lene Lovich and Fischer-Z, with increasing record sales.

A spin off to the live-show buildup is the encouragement given to Portuguese rock musicians to form their own bands, examples including Rui Veloso and Banda Sonora, UHF, Roxigenio, Street Kids and Jafumega. Veloso had number one hits with his debut album "Ar de Rock" and the single "Chico Fininho," and the UHF single "Cavalos de Corrida" was another number one. The result is that Portuguese rock music today feels it can confidently wave its own flag despite the obvious strength of foreign competition.

A chart breakdown shows that 1980 was a big year for British acts in the international section, Pink Floyd emerging as top group. The female quartet As Doce was the most successful of the national groups.

Pink Floyd have had an incredible success:

The following albums were number one:

I guess "The Dark Side Of The Moon" and "Wish You Were Here" were also number one. That would mean they had eleven number one albums.

Are you sure that The Game was "only" number 4.

I recall some Billboard magazines where it was higher.

Plus, it had a long chart run.

I hope you can find all that stuff.

Not sure why, but I remember seeing one chart where it was higher, also on the Billboard magazine. Maybe it was removed?

Those two Billboard charts (with The Game at number 4) are from October 1980, the album was relased in June. So maybe it debuted earlier.